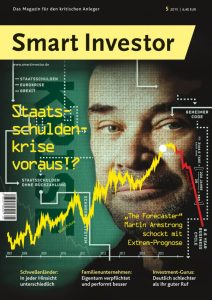 I recently appeared on the cover of “Smart Investor” after visiting journalist Ralph Malish. Click here to read the full interview (German).

Smart Investor: Mr. Armstrong, in 2015, released a powerful film about your life, The Forecast. We interviewed you extensively at Smart Investor 5/2015. How are you doing already and what is your current project?
Armstrong: I was involved with the sequel to the film that would be released later this year. Otherwise, we have expanded our services and now launched our computer system, which the government wanted for itself. It now produces more than 1,000 written reports a day worldwide without human intervention. We now use it in more than 40 countries, which means we probably have the largest institutional customer base in the world.

Smart Investor: Can you briefly explain our forecasting method to our readers?
Armstrong: In the 1980s and 1990s, I was one of the top international hedge fund managers, and was even named hedge fund manager of the year for predicting the fall of Russia, which triggered the 1998 hedge fund long-term capital management crisis. At the time, I saw a re-focus of global investment capital in the markets and then moving forward – followed by Japan in 1989, Southeast Asia in 1994 and Russia in 1998, following the euro. All this was fueled by capital flows. One can follow these movements of capital and see how they cause boom-bust cycles around the world.

Smart Investor: Corona has kept us under its spell for over two years. Was this turning point, or a drastic event like this, your cycle model visible?
Armstrong: Yes, I warned at our own World Economic Conference that if our model reversed in January 2020 (= year 2020.05) then the market would crash. We were even able to mark the exact day for March 2020 below. If an incident like Corona happened during the uptrend, it could have been largely ignored. But if something like this happens while rejecting the model, the feeling is inherently bearish. We further warned that there will be a deficit-based product cycle from January 2020 to 2024.

Smart Investors: In our perception, big epidemics happen with a certain regularity. Have you thought about the plague cycle and how it can go on?
Armstrong: Such epidemics have always existed – but never in history has the government gone so mad. The global lockdown has increased job costs and disrupted the supply chain, which will continue for years to come. This is an irrational response that has been proven wrong and has done a lot of damage. Most people know someone who fell ill with covid but did not die from it. Those who died probably died of any type of respiratory disease, such as during the annual influenza cycle. It was not a dangerous plague that killed 30% to 50% of the population in the 14th century like smallpox or the Black Plague.

Smart Investors: Now a new impressive event has begun with the heated war in Ukraine. How does this battle fit your model, especially the war cycle?
Armstrong: That too came at the right time. Our model showed 1/16/2022. Unfortunately, instead of trying to bring peace to the world, the West has turned Putin into a monster. The claim that Putin wanted to restore the old Soviet Union was pure propaganda. For the past 22 years he has made no attempt to restore communism, only calling Lenin a communist. He did not try to expand the border but warned against NATO occupation. In war, it is always important that both sides carry propaganda and be objective about the demands of both sides. Putin’s invasion of Ukraine was consistent with his warning, and came four days after US Vice President Harris recommended that Ukraine join NATO. It was completely irresponsible.

Smart Investors: Can you see in your models which regions or countries will suffer the most in this conflict, who will leave lightly and who will benefit?
Armstrong: On both sides there are people we call neocons, people who hate the other side. They cannot sleep at night as long as they have enemies. Unfortunately, the deteriorating economic outlook is a reminder that war has often served as a deterrent in the past. It seems that China is allying with Russia. I believe that the seizure of Russian private property is a serious violation of international law. Others will also realize that their assets could be confiscated if their country is in conflict with the West. This will definitely lead to a decline in global investment. It seems that this process has started properly and according to our model, it will get worse in the next ten years. Conflicts between countries are likely to be at this level. The arrests of people for being Russians only reminded them of the concentration camps for the Japanese in the United States during World War II, based solely on their nationality. If free investment is hampered it is very detrimental to the world economy.

Smart Investor: If we understand this correctly, cycles basically develop independently of the specific actions of individuals. It’s hard to imagine, but would the rise have been inevitable had the Russian president not ordered the attack?
Armstrong: That’s right. It is unreasonable to demonize Putin. There have been worse leaders in history, like Hitler or Stalin, who can kill millions without thinking twice. The development of things is largely determined by the economy. Usually you don’t bite the hand that feeds you. But imposing sanctions on Russia has the exact opposite effect: they sever Russia and sever economic ties, resulting in casualties and resulting in anger and retaliation. Rome survived for 1,000 years because the conquered provinces made a profit by selling their goods to Rome. The seizure of Russia’s currency reserves is, above all, a warning to China to be vigilant in its dealings with the West. For China, excluding Russia from the SWIFT system means that it is working on a flat basis for the introduction of its CIPS variant. Saudi Arabia has agreed to sell oil in yuan. These measures only guarantee that the conflict will continue to escalate and the world economy will be halved.

Smart Investors: As investors, we try to prepare for such strong cycles. Which asset class or sector should be avoided in this situation and where security can be expected?
Armstrong: Government bonds in particular should be avoided. The government will default and you will get nothing back. Borrowings from European governments from before World War II are now simply an attractive wall decoration. When a company goes bankrupt, its assets are sold and at least you get something back. But you can’t just run into art museums and steal government picassos. In times of war and geopolitical conflict, real security is the best resource.

Smart Investors: Gold is considered a safe haven, and in some places Bitcoin is also considered. However, these two resources are more than a thorn in the side of our government. What do you think about the idea that Russia’s argument could make life difficult for investors here in the future?
Armstrong: Gold has lost its mobility – so you can’t fly a plane with gold coins or a briefcase full of bars. Cryptocurrencies are weak, because credit cards without a power grid are a thing of the past. The government is trying to switch to digital currency and they will not allow competition so they will confiscate the cryptocurrency. The best is paper money or small denomination silver coins which are recognized by the average person. If there is no electricity grid, there will be exchange rate for tin cans.

Smart Investors: Gold and cryptocurrencies are also the main alternatives to paper money, which is putting extra strain on the war. Will the US dollar and euro survive this?
Armstrong: The US dollar will surpass the euro, but if we get involved in a real world war, the paper dollar may lose its value. While Europe has historically scrapped its Fiat money
The US dollar has never been canceled. Even Canada is now canceling its currency.

Smart Investors: The Great Reset, the World Economic Forum, and Professor Dr. Klaus Schwab are making waves in Europe. During the Corona epidemic, government action literally shattered the medium-sized economy. What do you think of the “big plans” of corporations, and are the actors’ ideas consistent with the cycle?
Armstrong: The Great Reset is indeed a real goal. This is not a conspiracy theory. Trump, Putin and Xi stumble across the road. They got rid of the first one and now the propaganda has turned to demonize Putin and Shike. They believe that with the release of these two leaders, they will be able to bring the world together under the auspices of the United Nations. Our model warns that authoritarianism will increase in this last decade. But they will fail. Marx succeeded only because slavery in Russia did not end until 1861, while in Europe it lasted only until the fourteenth century. So the ownership of the people was nothing, and the wealth of the aristocracy was easy to confiscate. Today people save for their own home, car and future. The slogan “You will have nothing and be happy” promoted by WEF is a red herring. The government will no longer be able to borrow indefinitely and will be a defaulter. To disguise this fact, the idea is given that all debts are being forgiven and they are doing it for you. Today there will be a guaranteed basic income to replace the government debt pension fund.

Smart Investor: Thank you very much for your very interesting explanation.

In stock market circles, American Martin Armstrong (born 1949) is considered a legend. In the early 1980’s, he accurately predicted the stock market crash of 1987 – and in the panic he predicted new heights for 1989. He also predicted that the Japanese stock bubble would burst in late 1989. He made his own predictions using the “Economic Confidence Model” (ECM), based on a database of currency history, which he used to reconstruct Armstrong’s (financial) history. You can find his daily updated evaluation on the blog https://armstrongeconomics.com .